Muscles of the leg and Foot 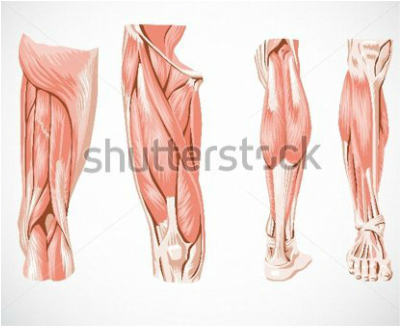 "The main framework of the body (skeleton) is covered by muscles, whose function is to permit movement and maintain posture. Sensory receptors in the muscles monitor the tension and length of the muscles and provide the nervous system with information about the position of the body parts, thereby enabling posture to be maintained."
-Brian Mackenzie
Part one upper leg


Muscles involved with the movement of the hips and thigh:

-The Gluteal group of muscles consist of the Gluteus Minimus, Medius, Maximus. These muscles including the Fascialate extend, flex and rotate the hip


-The Adductors such as the Pectineus, Gracilis Muscle, Adductors Magnus, Longus,      Brevis and Minimus move the hips back and perform Flexion and Extenion.


Iliotibiol Tract: collagen fibers that extend from thigh to knee.


Muscles that move the leg:


-The muscles the extend the leg at the knee are the Quadriceps, Femoris Iliopsoas and Sartius.


-The hamstrings Located at the back of the leg flex the leg at the knee.


The Popliteus muscle allows you to unlock the knee for extension and flexion. is located behind the knee.

Muscles that flex or extend the foot and ankles:


Abduction: is the movement of part of the body away from the center.
Adduction: is the movement back toward the center of you body.
Flexion: a bendin motion at a joint that decreases the angle between the two bones on either side of the joint.
Extension: the straightening of a bent joint increasing the distencebetween the bones one either side of the joint.